Technology can be tricky. You update one aspect of a process only to learn you need to update another. That was the case 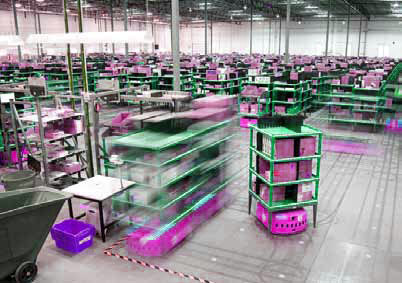 Computer software told the AGVs where to move, where to stop, when to turn, and how and when to pick up the ingots. However, the AGVs were made of old technology that wasn't capable of the fine control necessary to move large 30,000-pound ingots or the resulting sheets. They weren't fully compatible with the software. The AGVs would stop in the middle of the track. Worse, they were no longer capable of picking up the ingots perfectly balanced—a severe safety issue if one of the ingots managed to tip.

A new AGV could cost up to a half a million dollars a piece. The aluminum foundry needed an AGV retrofit, an upgrade the Hydrotech team was more than capable to provide.

The aluminum foundry had two AGVs. One would transport the ingots to be scarfed. Scarfing involves removing the outer portion of the aluminum ingot that is full of impurities and contaminants. Then the remaining aluminum is heated and rolled out to the length roll a customer has ordered. From there, the aluminum is rolled into a sheet and coiled, resembling a large metal roll of paper towels. This is when the second AGV steps in, removing the coiled aluminum from the line and moving it to storage.

The goal of the retrofit was to control the turning and velocity of the vehicle remotely via radio frequency (RF).

The Hydrotech solution consisted of a complete hydraulic power system including pumps, motor, filter, breather manifolds, tubing, accumulators, and the servo valve. Steering had to take place on front and rear wheels. Previously, the AGVs had proportional valves to handle steering, raising and lowering of the built-in scissor lifts, and braking. Hydrotech replaced the valves with high response servo proportional valves to control velocity and turning. Throughout the vehicles, inducers were added to feed information to the servo, which then fed that information via a radio frequency feed to the software. Using this information, the software tells the AGVs which wheels need to turn and at what degree. Steering cylinders were attached to each wheel. Wheels were turned via hydraulic motors.

All piping had to be done at the plant where the existing AGV was located. The end project consisted of the power unit, valves, and all plumbing as well as the programming, test, and final runoff.

The time between when the software request is made and when the AGV completes the request improved significantly. The delay is nearly non-existent, happening in milliseconds. Accuracy also improved. Ingots were now perfectly balanced. Better yet, the AGVs now drove faster and smoother, with no more jerky turns. The AGVs' scissor lifts also moved faster and smoother—increasing the speed in which ingots and coiled aluminum were moved throughout the factory. In short, the retrofit worked beyond the customer's expectations.

Do you have equipment, machines, or processes you'd like to modernize?  Contact our engineering team today to start your project!