The four central hydraulic units had been sitting in storage for nearly three years. They had originally been purchased from Hydrotech, Inc. in 1986 to operate several tire curing presses for a major rubber manufacturer.

The customer needed more capacity from their one of their facilities. One of the solutions was to bring those old hydraulic units back into use. As each unit can supply four to five presses, that meant up to 20 additional presses could be up and running drastically increasing output without majorly affecting available space.

However, the central hydraulic units were nearly 30 years old and, as a result, no longer fit the customer's more modern presses. Without these operational presses, rubber products would be backed up on the production line as curing is the final step before the tires are tested.  Downtime was the enemy, costing the customer money and delaying shipments to distributors.

The customer had a choice. Either delay the plan for increasing capacity at their plant by taking the time and money to engineer and purchase new hydraulic units or see if someone could update and refurbish the existing ones.

The customer went back to the original manufacturer or the units: Hydrotech Inc. and its Service & Repair Division.

A Relic is Rebuilt

The central hydraulic units were in such rough condition that only the tank reservoir was salvageable. It was sandblasted, acid dipped, and alkaline dipped to prevent erosion in the future.

But Hydrotech did more than just replace components. After nearly 30 years, the units were closer to technological relics than they were advance technology. Hydrotech consolidated the inner workings with smaller, more powerful hydraulic parts. Many of the hydraulic lines were removed as they were no longer necessary.

Hydrotech also modernized some of the plumbing as well as changed out the combination of components. This made the central hydraulic units more powerful and more energy efficient.

The entire process took only two weeks from inspection to completion. The customer's decision to repair instead of replace saved them the cost of buying a new tank and the engineering costs of a new design.  More importantly, it saved them from unnecessary downtime that could have hurt relationships with distributors, wasted plant space, and limited revenue.

Picture of all three rebuilt units: 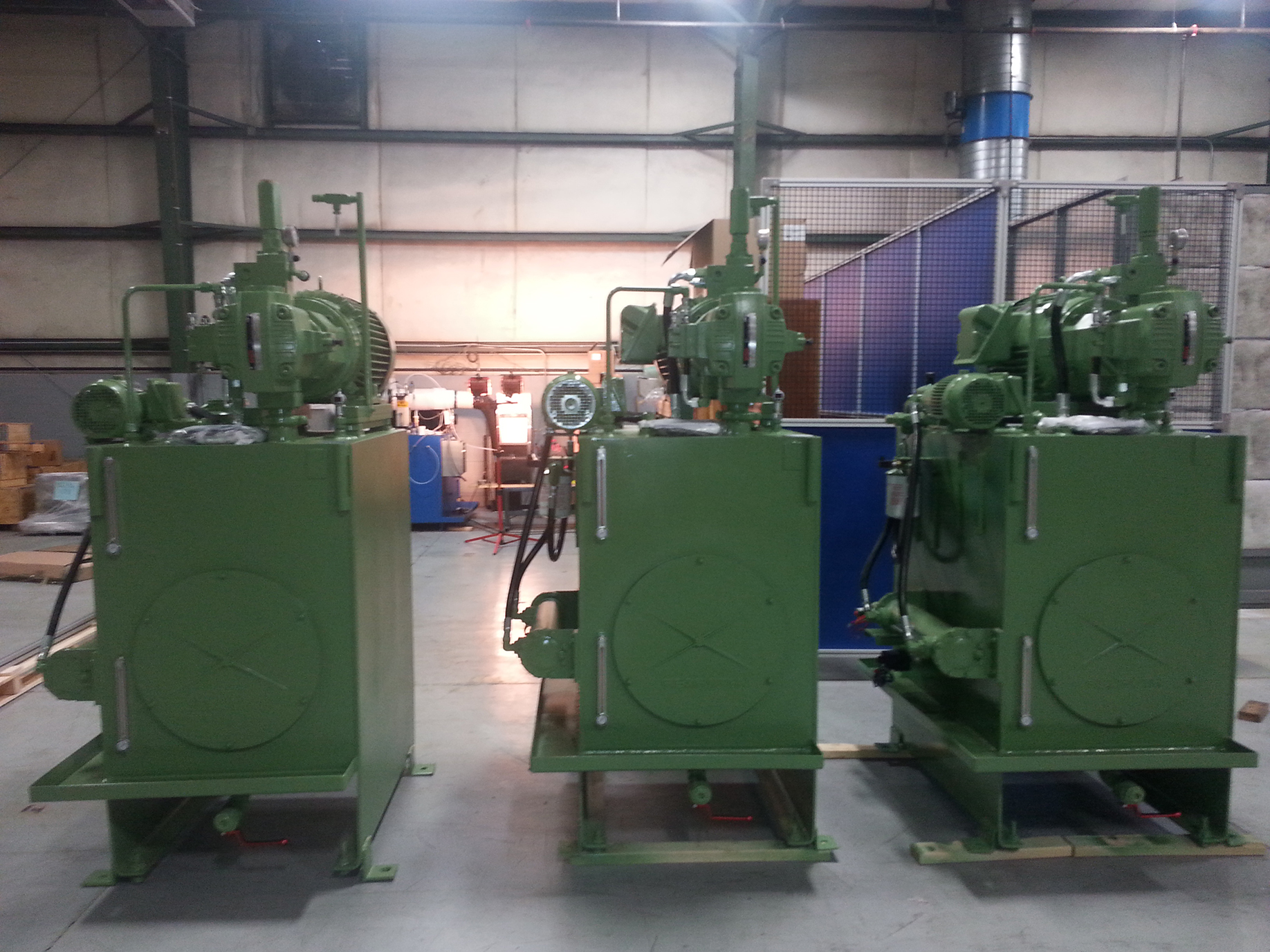 Do you have a hydraulic system that needs repair?

Many companies in similar situations have large hydraulic units that power critical machinery. But cost and space limitations prevent them from having backups or spares. As a result, it’s essential to reduce downtime and get machinery up and running as fast as possible.  Hydrotech’s Service & Repair Division is dedicated to remanufacturing and repairing your hydraulic units and systems quickly.

Contact Hydrotech today to learn more about our hydraulic power unit and system retrofits at 888-651-5712!